In honor of National Candy Day, I’m going to talk about something that is somewhat related. Diabetes. There was a time I was concerned for my health and my doctor thought I could have diabetes. I was really worried and thought “Hmm I guess that makes sense, I do love my sweets more than the average person”. My friends agreed as well so there, it was settled. Turns out I do not have diabetes.  I don’t know about most people but I was under the notion that diabetes was caused by eating too much sugar.

November is National Diabetes Awareness Month and although I don’t have diabetes, I know someone who does. And I think its great to learn more information about this subject because I’m sure other people are or were under the same notion I was. 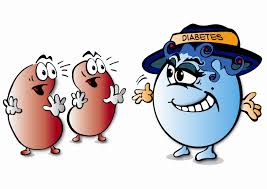 The American Diabetes Association organization (ADA) is doing everything in their power to get Americans to live a healthier lifestyle, prevent, and handle diabetes. This years theme is “America Gets Cooking to Stop Diabetes® which is presented by Sun Life Financial”. The ADA has dedicated a title for everyday of the week to promote exercise and a balanced diet. The ADA is so dedicated they encourage others to participate in a do-it-yourself fundraiser,” they’re calling Cook to Stop Diabetes. This involves family, friends, and the community coming together for a fun party involving healthy cooking and raising money to stop diabetes.

If you would like to find out more informational facts about diabetes or the ADA visit: